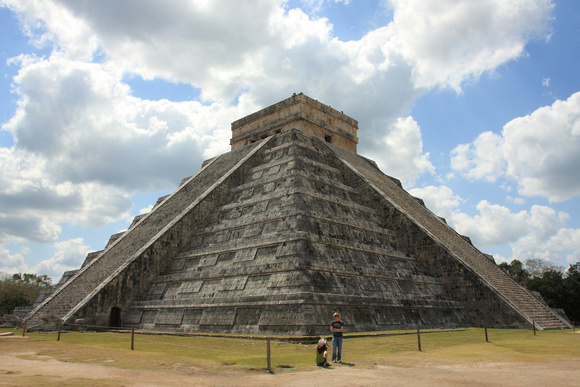 Emily and Nathaniel at El Castillo, the great pyramid at Chichen Itza in the Yucatan Penninsula of Mexico.

Dominating the center of Chichén is the Temple of Kukulkan (the Maya name for Quetzalcoatl), often referred to as "El Castillo" (the castle). This step pyramid has a ground plan of square terraces with stairways up each of the four sides to the temple on top. On the Spring and Autumn equinox, at the rising and setting of the sun, the corner of the structure casts a shadow in the shape of a plumed serpent – Kukulcan, or Quetzalcoatl – along the west side of the north staircase. On these two annual occasions, the shadows from the corner tiers slither down the northern side of the pyramid with the sun's movement to the serpent's head at the base.


Mesoamerican cultures periodically built larger pyramids atop older ones, and this is one such example. In the mid 1930s, the Mexican government sponsored an excavation of El Castillo. After several false starts, they discovered a staircase under the north side of the pyramid. By digging from the top, they found another temple buried below the current one. Inside the temple chamber was a Chac Mool statue and a throne in the shape of Jaguar, painted red and with spots made of inlaid jade.
The Mexican government excavated a tunnel from the base of the north staircase, up the earlier pyramid’s stairway to the hidden temple, and opened it to tourists. In 2006, INAH closed the throne room to the public.
© Bryan Sayler
Powered by ZENFOLIO User Agreement
Cancel
Continue