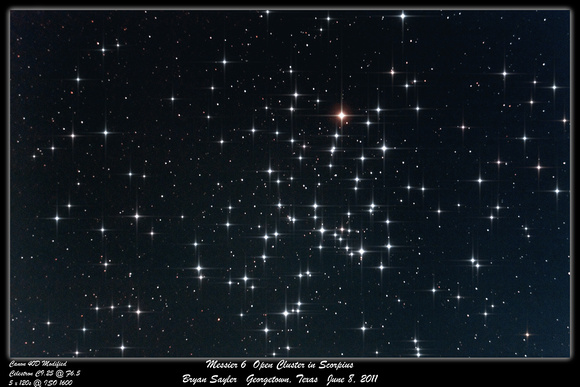 About this Object:
The Butterfly Cluster (cataloged as Messier 6 or M6, and as NGC 6405) is an open cluster of stars in the constellation of Scorpius. Its name derives from the vague resemblance of its shape to a butterfly.

The first astronomer to record the Butterfly Cluster's existence was Giovanni Battista Hodierna in 1654. However, Robert Burnham, Jr has proposed that the 1st century astronomer Ptolemy may have seen it with the naked eye while observing its neighbor the Ptolemy Cluster (M7). Charles Messier catalogued the cluster as M6 in 1764. It was not till the 20th century that star counts, distance, and other properties were measured.