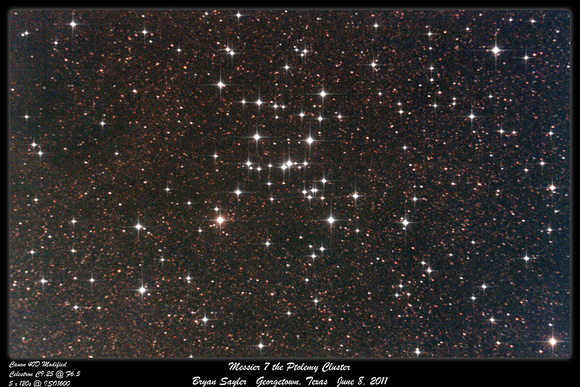 About this Object:
Messier 7 or M7, also designated NGC 6475 and sometimes known as the Ptolemy Cluster, is an open cluster of stars in the constellation of Scorpius.

The cluster is easily detectable with the naked eye, close to the "stinger" of Scorpius. It has been known since antiquity; it was first recorded by the 1st-century astronomer Ptolemy, who described it as a nebula in 130 AD. Giovanni Batista Hodierna observed it before 1654 and counted 30 stars in it. Charles Messier catalogued the cluster in 1764 and subsequently included it in his list of comet-like objects as 'M7'.

Telescopic observations of the cluster reveal about 80 stars within a field of view of 1.3° across. At the cluster's estimated distance of 800–1000 light years this corresponds to an actual diameter of 18–25 light years. The age of the cluster is around 220 million years while the brightest star is of magnitude 5.6.