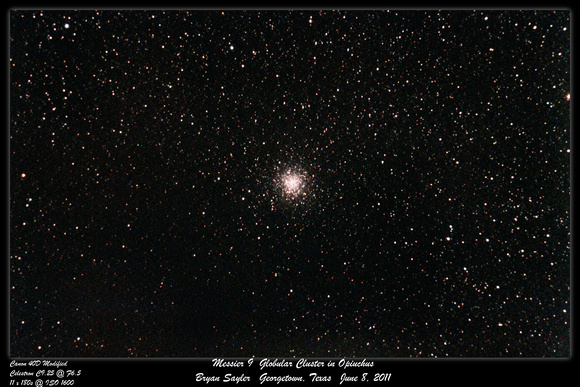 About this Object:
Messier 9 or M9 (also designated NGC 6333) is a globular cluster in the constellation of Ophiuchus. It was discovered by Charles Messier in 1764.

M9 is one of the nearer globular clusters to the center of the Milky Way Galaxy with a distance of around 5,500 light-years. Its distance from Earth is 25,800 light-years.

The total luminosity of this cluster is around 120,000 times that of the Sun, the absolute magnitude being -8.04. The brightest individual stars in M9 are of apparent magnitude 13.5, making them visible in moderately sized telescopes. There have been 13 variable stars found in M9.