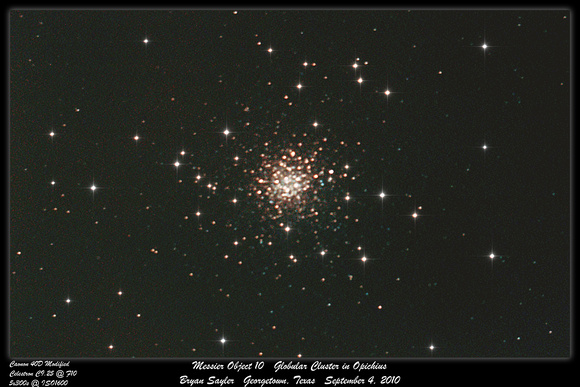 About this object:
Messier 10 or M10 (also designated NGC 6254) is a globular cluster in the constellation of Ophiuchus. The object was discovered by Charles Messier on May 29, 1764, who cataloged it as number 10 in his list. He described it as a "nebula without stars", but later study revealed it as a globular cluster of thousands of stars. M10 has an apparent diameter of some 20 arcminutes, about two-thirds of the apparent diameter of the Moon. Viewed through medium-sized telescopes it appears about half that size (8' to 9'), as its bright core is only 35 light-years across. M10 has a spatial diameter of 83 light-years and is estimated to be 14,300 light-years away from Earth.