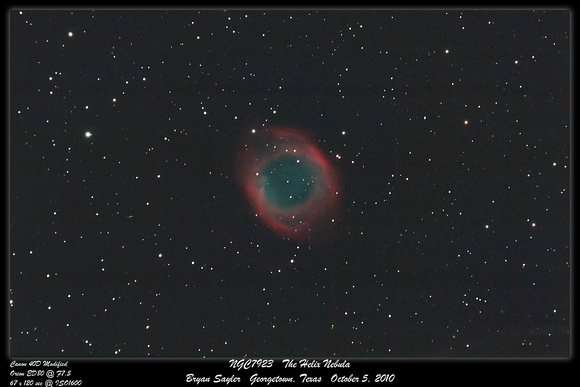 About this Object:
The Helix Nebula is an example of a planetary nebula, or 'planetary' formed at the end of a star's evolution. Gases from the star in the surrounding space appear, from our vantage point, as if we are looking down a helix structure. The remnant central stellar core, known as a planetary nebula nucleus or PNN, is destined to become a white dwarf star. The observed glow of the central star is so energetic that it causes the previously expelled gases to brightly fluoresce. The Helix Nebula in the constellation of Aquarius lies about 700 light-years away, spanning about 0.8 parsec or 2.5 light-years. Currently, the age is estimated to be 10,600+2,300−1,200 years, based solely upon a measured expansion rate of 31 km·s