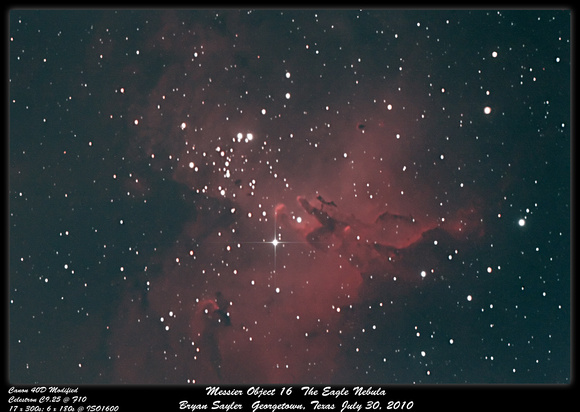 About this Object:
The Eagle Nebula (catalogued as Messier 16 or M16, and as NGC 6611) is a young open cluster of stars in the constellation Serpens. Its name derives from its shape which is resemblant of an eagle. It is the subject of the famous "Pillars of Creation" photograph by the Hubble Space Telescope, which shows pillars of star-forming gas and dust within the nebula. The Eagle Nebula is part of a diffuse emission nebula, or H II region, which is catalogued as IC 4703. This region of active current star formation is about 6,500 light-years distant. The tower of gas that can be seen coming off the nebula is approximately 57 trillion miles (97 trillion km) high.