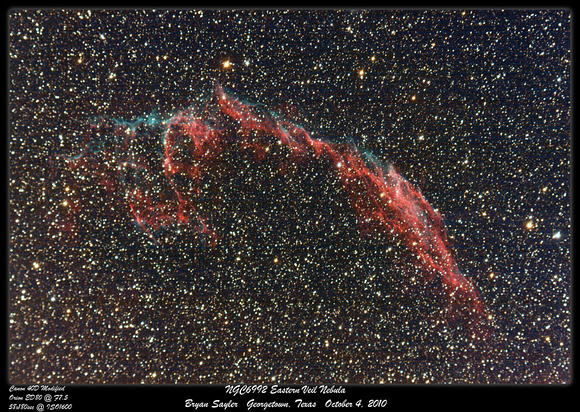 About this Object:
The Veil Nebula, is part of the Cygnus Loop, radio source W78, or Sharpless 103. Other parts of the loop include the 'Eastern Veil', the 'Western Veil' or 'Witch's Broom Nebula', and Pickering's Triangular Wisp. It is a large, relatively faint supernova remnant in the constellation Cygnus. The source supernova exploded some 5,000 to 8,000 years ago, and the remnants have since expanded to cover an area of ~3x3 degrees; about 6 times the diameter or 36 times the area of a full moon. The distance to the nebula is not precisely known, with estimates ranging from 1,400 to 2,600 light-years.