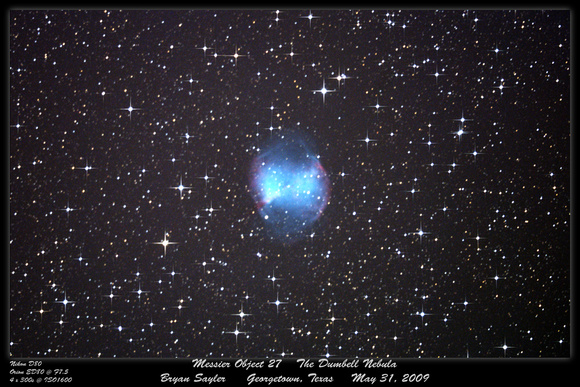 About this Object:
The Dumbbell Nebula (also known as Messier 27, M 27, or NGC 6853) is a planetary nebula in the constellation Vulpecula, at a distance of about 1,360 light years. A planetary nebula is an emission nebula consisting of an expanding glowing shell of ionized gas ejected during the asymptotic giant branch phase of certain types of stars late in their life. This name originated with their first discovery in the 18th century because of their similarity in appearance to giant planets when viewed through small optical telescopes, and is otherwise unrelated to the planets of the solar system. They are a relatively short-lived phenomenon, lasting a few tens of thousands of years, compared to a typical stellar lifetime of several billion years.